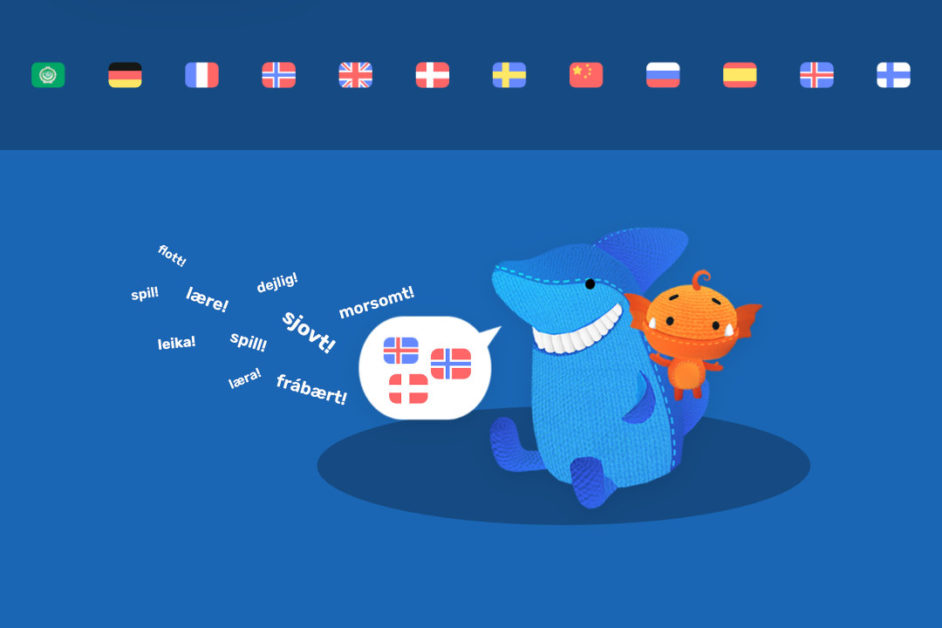 Helsinki-based Moilo, specializing in children’s pedagogical content, relaunches the language learning application Moka Mera Lingua with three new additional languages – Danish, Icelandic, and Norwegian. The application is now available in twelve languages. It provides the opportunity for 3-8 year-olds to combine gaming and learning in a fun and pedagogical way by playing with two animated characters. Atlas, the shark, and Moka Mera, the little monster are best friends who speak different languages. The languages can be freely changed based on what language the child wants to learn and the child’s mother tongue. Moka Mera Lingua contains no text, so no reading skills are required to play.

The update was possible through a grant from Nordplus, and is a collaboration between Aalborg University in Denmark, Nord University in Norway, and the University of Iceland in Reykjavik and Moilo in Finland. The team has collaborated with the update of the Nordic languages and will now continue with the research part of the project, to study children’s language learning in combination with digital play.

– Cooperating with Nordic colleagues in this project has brought to light the importance of the Nordic languages, spoken by comparatively few people, for both individuals and national identity, states Helga D. Ísfold Sigurðardóttir from Nord University in Norway.

Eva Brooks from Aalborg university suggests that Nordic countries have a joint overall approach to pedagogy and design, which is built upon aspects such as participation and democracy.

– From this point of view, Nordic collaboration can strengthen this research agenda, she argues. Moka Mera Lingua opens up opportunities for Nordic children to learn a variety of new languages and train vocabulary in their first language.

– Moka Mera is a highly beneficial contribution to Norwegian language learning apps – and the focus on the spoken language fits the young target group perfectly, says Sigurðardóttir. At the same time, it may prove an invaluable asset for children learning the Nordic languages, for instance refugees. The app being free and safe makes it different from many of the currently available apps, and thus more likely to have an impact, she continues.

The app was originally financed by the Swedish Cultural Foundation and Brita Maria Renlund Foundation in Finland and launched in February 2020. The languages now available in the app are; Arabic (Levantine), Chinese (Mandarin), Danish, English, Finnish, French, German, Icelandic, Norwegian, Russian, Spanish, and Swedish. Goethe Institut Finland and The German Embassy in Finland financed the German language update in 2021. The app will soon be updated with the Ukrainian language.

Skúlína Hlíf Kjartansdóttir from the University of Iceland is also having high expectations of its usability for young kids, especially those immigrating to Iceland.

– I hope that together we can study the translanguaging of young learners and how Moka Mera Lingua can assist in this. I am keen to learn how playful learning can ease vocabulary acquisition and help young students cope with a second language.

Brooks agrees with this line of thinking and wants to focus on the interplay between play and learning from a child’s perspective.

– Most often, studies in this domain, including young children, take on an adult perspective. By identifying these aspects from a child’s point of view, we can hopefully better understand how these two aspects, when considering them as a unity, can contribute to children’s game-oriented playful learning, where play as such is at the forefront, concludes Brooks.

Moka Mera Lingua is free of charge and safe for children to use. The app doesn’t gather any usage data and there are no advertisements, outside links, or in-app purchases available. The application works offline and no internet connection is needed once downloaded. The app can be used on iOS and Android devices, on both smartphones and tablets. In Finland, the app is frequently used in kindergartens across the country, and at home by parents and children.